Check out all of our great DIY and Recipe Videos on YouTube! Watch Now
Home / Balanced Life / Pop! tini / What is Yacht Rock, and Why Can’t I Stop Listening?
Pin2
Share15
Tweet
17 Shares

For those of you who listen to SiriusXM, you’ve probably heard ads for the new temporary Yacht Rock station taking over Channel 31 (formerly the Coffee Shop Station) now until Sept. 7.  When the station first changed over, I didn’t understand what was happening-what was this Yacht Rock and why did it sound like bad 70’s music?  I barely gave it my attention and switched over in a huff to the always dependable Channel 28-The Spectrum (music mix with everything from Rolling Stones to Pearl Jam to new stuff), and lo and behold Mark Goodman was on-air promoting this crazy new Yacht Rock thing. 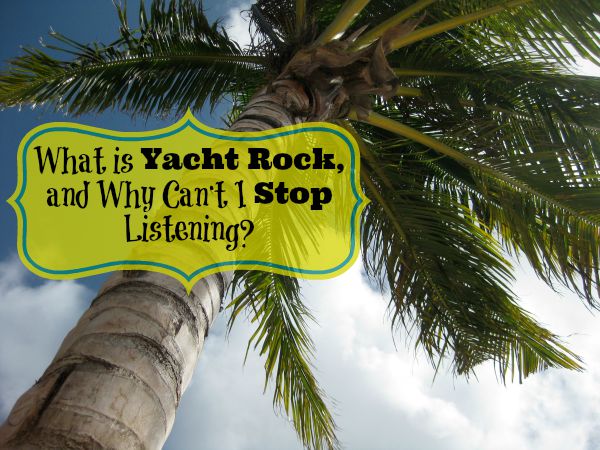 Wait, what?  Mark Goodman is lending his stamp of approval?  When Mark Goodman speaks, I always listen–but it’s a force of habit, something I’ve been doing since the early days of MTV (where he was one of the original VJ’s).  So, the Goodman-God explained that Yacht Rock is a “special” blend of music from the mid-70’s-mid-80’s—its smooth chords and lyrics evoked a relaxed, easy-going vibe.  Many references were made to boating, yachting, and California.  Thus the name “Yacht Rock” was coined.   Ohhhh, now it made sense.  And all these years I had been referring to it as (pardon the expression) “Cheezy Wuss Rock.”  Ohh, my mistake.

I decided to head back over to this crazy Yacht Rock station and give it another chance.  As I tuned over, “Peg,” from Steely Dan was just ending. Oh, I remember that little ditty.  Then came Christopher Cross’ “Sailing.” Yes! I started singing along, how could you not?  Next-Gerry Rafferty’s “Baker Street.” You know that one–it’s got that unmistakable 80’s Sax–sounds like it should’ve been on the St. Elmo’s Fire soundtrack.  Then the hypnotic Yacht Rock siren–Sade and “Smooth Operator!”   And next–my all-time favorite by the yachting Commodore himself, Lionel Richie’s “All Night Long.”  This one always takes me to back to my very first dance recital where we did jazz runs ALL – ACROSS – THE FLOOR, as the chorus rang out–All – Night – Long.  All Night, All Night.  All Night Long…

“Hey, this isn’t half bad,” I thought, as I simultaneously laughed at my  sheer enjoyment of this cheezy, pop music.   It really did evoke a relaxed, easy-going vibe and who couldn’t use a nice dose of that while navigating the horrendous Atlanta traffic?!   And it takes you back to a bygone era.  I’m not going to say a safer, simpler time because we all know things are better now.  The country was in the toilet in the late 70’s, early 80’s (riddled with a recession, high interest rates, crime and drugs).  But when one listened to this music, they were taken away to an idyllic place– just like the all-time-Yacht-Rock-Great “Escape/Pina Colada” song sings –“Come with me and escape.”

Now, I’m not saying I could listen to this Velveeta (ie: Super Cheeze!) music all day long, but in small doses, it is quite fun-like a karaoke bar in your car.  I’m sure if I overdosed on it, I’d find myself feeling like Paul Rudd in “40 Year Old Virgin.”   You remember the scene–he approaches his boss, played by Jane Lynch, and threatens that he will “Ya Mo Burn this place down” if she doesn’t change the Michael McDonald DVD that’s been playing on their TV wall for the past two years.  Yikes!

The Influence of Yacht Rock

The name “Yacht Rock” was popularized back in 2005 by a short-lived TV show of the same name.  The comedic genius of the show went viral online and developed a cult following. Check out this great article from Rolling Stone. Separately, in 2009 the Atlanta-based Yacht Rock music tribute band, Yacht Rock Revue, was formed.  They’ve become very popular and tour nationally.  Probably the best known tribute to Yacht Rock can be found in the theme music to the very popular Saturday Night Live skit called “The Calfornians.”  One listen and you can hear the opening licks from America’s “Ventura Highway.”

So next time you’re in your car, check out the SiriusXM Yacht Rock Channel (Channel 31), and let me know whatchya think?  Do you have a favorite Yacht Rock song?  Leave me a comment below.  I’d love to hear your thoughts!

*Note, this post is not an ad for Sirius/XM–I’m just a little over-excited about this Yacht Rock phenomenon.