Check out all of our great DIY and Recipe Videos on YouTube! Watch Now
Home / Balanced Life / Pop! tini / Why “Pan” is a Must-See Movie!
Pin2
Share6
Tweet
8 Shares

This past week my family and I attended an early screening of the new Warner Brothers film, Pan.  It was an amazing re-imagination of Peter Pan’s beginning.   I would definitely recommend seeing it, particularly on the big screen….and here’s why we loved it… 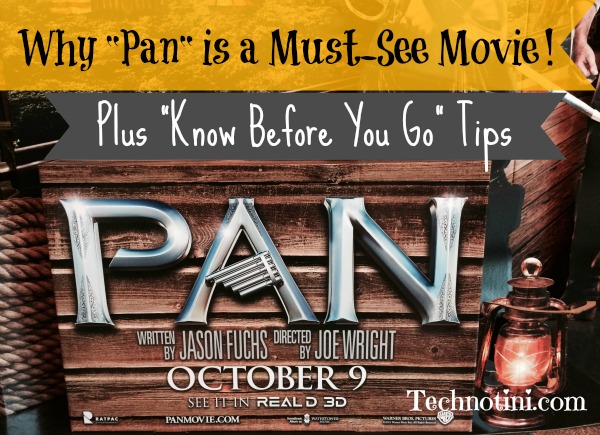 (Disclosure:  We received free tickets to a free early screening, but I was not asked to write about or promote this film.  I’m just doing it because I thought it was…amazing!)

Pan presents the backstory of the beloved Peter Pan (played here by newcomer Levi Miller).  It’s absolutely beautifully done, each act presented through a different artistic direction as well as flying, soaring, and swooping stage direction from start to finish. The movie seamlessly transitions from gloomy, WWII London to a dark dystopian, steampunk style version of Neverland controlled by the extremely evil Captain Blackbeard (played magnificently by Hugh Jackman).  The music choices also reflect the shift in artistic direction and the two worlds, particularly as Peter arrives at Blackbeard’s mine.  The enslaved lost boys are forced to sing Nirvana’s “Smells like Teen Spirit” in a style very reminiscent of Pink Floyd’s “Another Brick in the Wall,” which of course was inspired by Roger Water’s youth in WWII (and post WWII) London.   It was brilliant!  Creepy, dark, and uncomfortable, just like the new world into which Peter was dropped.

Soon after his arrival, Peter befriends a young and swashbuckling Hook (very reminiscent of Indiana Jones and played by Garrett Hedlund).  Together, they embark on a journey through a more traditional, paradiso version of Neverland—complete with vibrant tribal villages, mermaid lagoons, and of course crocodiles on their way to the mystical world of the pixies.  The movie is peppered with references to the original Peter Pan story, and the end is a joy to all Peter Pan fans who still believe in fairies and the power of pixie dust!!!

Know Before You Go Tips:

I took my two daughters who are 5 ½ and 3 ½.  My older daughter was completely enthralled the whole time however my younger daughter was scared during the first half (which I consider to be the opening scenes in WWII London and the second Act which takes place in Blackbeard’s mine).  Once the movie transitions to Act 3-the tribal territory of Neverland, it’s not as scary and my younger daughter was fine.  She really enjoyed Act 4.  I don’t want to give away any spoilers so I’ll just say, the dark beginning of the movie leads to a beautiful light at the end of tunnel full of all the wondrous pixie dust that you would expect!

See it on the big screen to take advantage of the 3D, soaring special effects. You’ll lose the beauty of the cinematography when watching it on a TV and especially a tablet.

Have you seen the new Pan?  What did you think?  Leave me a comment below with your thoughts.