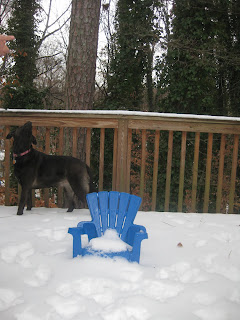 Being a fledgling tweeter just a few days ago, my initiation into this crazy, information packed, ADHD-inducing tweet-osphere couldn’t have come at a better time–Enter #snowpocalypse, #hothlanta,#SnowATL, in other words, “The Great Southern Snowfall of 2011.”

For those of you not familiar with the Southern Snowpocalypse of 2011, here’s a quick recap. The snow started this past Sunday and by Monday afternoon, we had an accumulation of about 4-6 inches. Nice little dusting by most cold-weather climate standards but for the Deep South, this was a paralyzing blizzard literally bringing everything-businesses, roads, even Hartsfield-Jackson Airport (1 of the busiest in the world) to a grinding halt.

At the beginning of this winter event, I turned as always to my trusty online community-social network Facebook. I began by posting some hopeful snow wishes, “blizzard” preparation notes, and a couple winter song YouTube videos for good luck. Then I sat back and watched the flurries fall and smiled as more and more friends started posting their snow fall counts (1″-2″-3,”etc) along with pictures of kids and dogs romping in the fluffy white stuff.

Then as the fresh powder turned to ice and the FB postings started to die-down, I turned to Twitter which was…just getting started. For the next four days, I watched the city react to this monumental event. There was sheer excitement and joy emanating from all of the adults, giddy as children about the first “bonafide” snowfall in years. There was anger from some “Northerners” and non-snow lovers, disgruntled by the city’s response to the crisis. (The city only had 11 snowplows on Monday, which eventually rose to 58 when reinforcements from out-of-state finally arrived late in the week. By following hash tag discussions, I was able to keep up with dozens and dozens of hilarious snow-related anecdotes and of course updates/status reports on road conditions, traffic jams, business re-openings, etc. I’ve compiled a list of what I think are the best of and worst in Social Media for “The Great Southern Snowpocalypse of 2011.”

Technotini Toast (AKA-The Winners in Social Media)
1) @KwanzaHall–Atlanta City Council Member, Kwanza Hall, wasted no time in reaching out to Atlanta residents. He offered up assistance and support as well as constant, thorough, and timely updates on everything snow-related. He also really pushed to get people out and about to patronize the local businesses that were open. Kudos to Kwanza!
2) 11 Alive News (NBC Affiliate)–set up an in-studio response team to field phone calls and Facebook inquiries from people stranded in their homes, needing assistance, and wanting information. Great use of dual-screen capability, perfect example of online/TV convergence for community support!
3) The creative hash (#) tags in Twitter. #Snowpocalypse, #SnowATL, #Hothlanta. What exactly is Hothlanta? Glad you asked. As a play on the usual “Hotlanta,” a Star Wars fan realized that our fair city more closely resembled the snow and ice covered planet Hoth, from Empire Strikes Back and thus dubbed Atlanta “Hothlanta.” Which brings me to #4…
4) My favorite online videos from Snowpocalypse 2011:

My second favorite video is of the ice skater skating down Peachtree Street in mid-town Atlanta. It really gives you a sense of just how thick the ice, covering the city, was.

Peachtree St. Ice Rink in Midtown from A.Nendel on Vimeo.

None, Atlanta finally got some real snow and 4-5 snow days! Oh, wait, here’s one-the poor shmoes, like me, that work from home and telecommute. No snow days here, except from the home office window but that’s not half bad.