Check out all of our great DIY and Recipe Videos on YouTube! Watch Now
Home / Family / #ParentFailKidsWin / My Dog (I mean, my 2 year old) Ate My Photo Album
Pin
Share1
Tweet
1 Shares 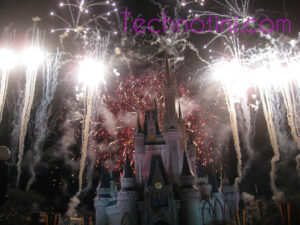 For my birthday this year, we did a weekend getaway to Walt Disney World.  At the end of our trip, I decided to splurge and get an overpriced souvenir photo album.  I figured it would be an incentive for me to get our vacation photos organized in a timely manner.  I knew the girls would love seeing their favorite characters on the cover and be excited that  this was the album housing those special Disney photos.

What I didn’t think about was my unpredictable two year old’s mischievous side…Like most 2 year olds, her Gremlin side comes out if she misses her nap but instead of tantrums, she turns to eradic, super messy behavior.

One day last week, I was trying to get dinner ready.  When little Zoe turned to the Disney album, at first I was a little nervous.  But then I noticed she was sweetly naming all the characters on the cover and making up little stories about each one.  “Good job, Shana,” I thought and patted myself on the back.  “The album was a good decision.”

Then all of sudden, I heard a strange ripping sound accompanied by little giggles.  I quickly looked over into the living room.  Horror-struck, I stood there watching my daughter rip each page out and then crumple them for good measure. Thankfully, I hadn’t yet put any pictures in, but all the pages were still being ripped out and destroyed.

“Nooooooooo,” I said as I ran over and tried to save my poor album.  But it was too late. The damage was done.  Half the album lay crinkled on the floor.  I should’ve known better to leave my overtired two-year old with something so easily destructible, but she was having so much fun and playing so nicely I thought it just might be ok.

I tried to explain to her that we don’t rip and destroy our nice things, especially books or albums.  At first she just kept smiling, very proud of herself for her new paper art all over the floor.  But then as I kept calmly explaining why ripping nice things is bad along with very sad, frown faces; she started to get it.  “Sah-ee  Mommy,” and gave me a big kiss and I forgot about my poor, sad little album.

Below is a picture with the remnants of the destruction. I threw out the unsalvagable ones before I thought to take a picture. 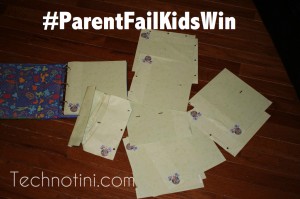