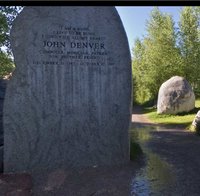 I was watching PBS the other night and an interesting documentary on John Denver (Yes, I like John Denver—not sure if it’s the classic songwriting style, the stunning environmental lyrics, or my memories of him jamming out with Kermit on the Muppet Show-taking me back to a simpler time)…But as I was saying…so the show was interrupted for the usual pledge drive where the spokesperson gave a big long schpiel about the bountiful collection of programming (nature, science, music, politics, children’s) and guilty I tried to figure out how I missed all that. Growing up, PBS was THE source for all things nature and science and politics—but that was also before the over 500 channels on cable, such as : the three 24 news networks, the family of Discovery Channel networks, National Geographic, VH1 Classic (which actually plays music and music specials) and FreeSpeech TV and Al Gore’s Current TV-the true citizen journalism network.

Operating on a “public-funding” budget makes it hard for PBS to stand out in a sea of big budget, advertising-friendly networks—however, I think it’s this small budget that has led them to –what in my opinion—is their piece de resistance! The concerts and music documentaries. They are gritty, real, sometimes unpolished, sometimes award-winning, and classic. It’s the programming that wasn’t necessarily meant to be a commercial success, thus –isn’t as expensive to replay time and again. They highlight musical legends and events like The Grateful Dead, CSNY, Hendrix, Joplin, Monterrey Pop Festival, and of course Woodstock. And in all my 500 channels, I haven’t found anything else like it. However, that being said, I have to admit Comcast’s on-demand music section has made a strong attempt, and has come up with some good programming like a look into Jane’s Addiction’s 1997 tour—but there’s something to be said for good old fashioned viewer supported public television-particularly their music programming.

Music is ephemeral, but when we capture it on film, we can savor it for just a little bit longer….
“I am a song, I live to be sung.” ~ John Denver