It can be tricky to break through the Twitter limitation of 2000 Following ceiling.  In this post, I provide strategic and actionable steps to help you break through and succeed in Twitter.

Recently, I’ve started to really embrace Twitter.  I’ve gotten involved in Twitter parties, conversations, trends, and link-ups.  I’ve made lots of fabulous new connections and friends.  However, I also hit the infamous and widely dreaded 2000 Following ceiling.  I was so annoyed that I couldn’t follow any more people, especially these great new Tweeps with whom I had just connected, that I almost quit Twitter.  Grrr, Twitter… But I had just invested so much time and energy into expanding my connections;  I didn’t want to throw all that away, so I did some research and realized that it was time to clean nest–clean my Twitter nest that is.  Besides, I didn’t really want to spring-clean my pantry today anyway.

What is the dreaded 2000 Following ceiling?

If you’re like me, you followed everyone and anyone who seemed interesting when you first joined Twitter.  But maybe now, you’ve gotten more involved and realized your tastes have changed your strategy has changed, your goals have changed, or maybe you are quickly reaching the dreaded Following 2000 ceiling. What is the  Following 2000 ceiling? In order to combat spam and misuse, Twitter has a rule that once you “follow” 2000 users, you can not follow anyone else if you do not have a strong number of “Followers” yourself.  No one knows the exact ratio.  The general rule of thumb is two-thirds or 70%.  So, once you’ve hit 2000, you’ll most likely need to reach 1400 followers before Twitter lifts your restriction enabling you to “follow” again. So, what should you do if you hit the dreaded 2000 limit?  Clean Nest!

Clean up who you’re “Following”

Go through your Following list and start unfollowing people that are not following you back.    I recommend Crowdfire (formerly Just Unfollow)  It’s  a free service that allows you to sort/review your Twitter account via:  Non Followers, Fans, Who Unfollowed me, Inactive Following, and All Following.  As it turns out, I had over 1300 people that I was following who weren’t following me back. (This is listed under “Non Followers.”)  As you can see, since I started managing this 3 weeks ago, I’ve whittled away at this list and am down to 1079 Non Followers. It’s still a big number so whenever I have a chance, I go through and review this list and try to make it work for me. 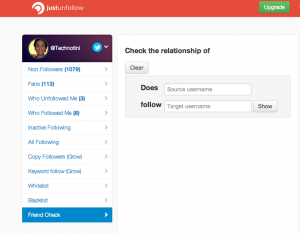 Many of these Non Followers are companies or celebrities that I am still interested in “following.”  So I created a list (in Twitter) to keep track of their tweets which will enable me to keep “following” them without wasting a precious “following” slot. Remember, if you “unfollow” anyone, you can always re-follow them at anytime.  A good rule of thumb is before you click Follow-check to see what ratio the Tweeter has. Does it look like they follow-back most people?  If not, you may want to just add them to a list and watch them from there until you’ve surpassed the 2000 Following ceiling.

JustUnfollow.com also lets you search by name (via Friend Check), so you can see if real life friends or colleagues are following you and if not, you can send them a nice note reminding them to follow you back. It’s also a good time to send some Twitter love-make a point to interact with Tweeps that you know in real-life (Retweet, or Favorite some of their latest tweets).  That will remind them of your Twitter presence and easily stimulate conversations since you know them.

3)  Give non-followers one more chance

As I review my non-follower list, I often come across Tweeps who seem interesting and have a good ratio of followers to following.  So for these folks, before I press Unfollow, I try and give them a second chance.  I’ll go to their profile, check out their latest tweets.  If I see something that I find interesting, I’ll Retweet it and/or send them a Reply and try to engage them.  If after a week or so, I don’t receive a follow, then I’ll add them to my private list and Unfollow until I reach the point where I can follow folks more freely.

How do you stay organized on Twitter?  Have you encountered the dreaded 2000 Following Ceiling? Do you have any suggestions related to Twitter organization or Unfollows?  I’d love to hear your thoughts!